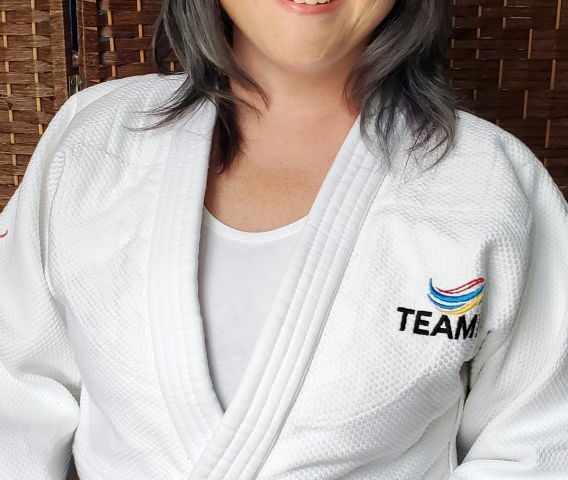 There’s no age limit to start judo, and no special path you have to take to get involved – at least, that’s what Newfoundland and Labrador’s Eileen Parsons’ has found. She started judo at 19 years old, stopped for a spell, but ever since has continued practising the sport for over a dozen years, just as involved and passionate about judo as ever.

It all started at Newfoundland’s Memorial University in the mid-1990s when Parsons discovered what would become her sport of predilection, “I took a self-defence course offered by the university’s club (MUN Judo); it was one hour a week for 10 weeks – and I loved it! The very next semester, I joined the judo club.”

And with that, she was taken in by the universe of tatamis, ippons, and judogis. “I’d never heard of judo before that course! I really liked the physical aspect of the sport and I just think overall it fits my personality really well.”

The sport never left Parsons’ thoughts, even as she took some time away to travel and start a family – among other endeavours. In 2008 she returned to her judo practice, and in 2012 earned her black belt (Shodan), then her 2nd Dan in 2016 (Nidan).”I had had getting my black belt in mind, and I felt like I hadn’t finished the job.”

Not content to just practise the sport, Parsons also took part in other ways: “Little by little, I started to get involved with the club’s activities again.” After undergoing surgery in 2010, she began refereeing and earned her Provincial A level in 2012. She earned her National Coaching Certification Program (NCCP) Level 3 in 2016, and benefited from Tracy Angus’ guidance in terms of developing coaching skills. In between all that hard work and study, Parsons assisted Coach George Becket, teaching judo to young children and even introducing her own children to the sport.

“I love to see children develop through judo! With little ones who are afraid of falling, it’s amazing to see the look on their faces when they can finally do certain maneuvers. There’s a lot of self-confidence that comes with learning judo – it’s not a sport where you can be timid.”

Yet a commitment to judo comes with its own set of challenges in Newfoundland and Labrador, where many young people often move on to more well-known, or better funded sports.

Regardless of the seeming allure of other sports, Parsons remains confident that judo will grow in the province and encourages young people to try it out, noting that it’s a great accelerator to other important life skills. “It’s obviously good for physical training, but it also helps build trust, camaraderie, and fosters a sense of respect. Judo contributes so much to a child’s development – whether they’re doing it at a competitive or recreational level.”

As proof of her convictions, she’s currently working on a new judo training program for youth ages 12 to 18, and also hopes to offer self-defence classes, thereby making good on her commitment to encouraging more women to participate in the sport she loves.

Parsons is proud to be able to give back to judo, the sport she adores, “In Newfoundland and Labrador, our coaches, our volunteers, and members of our judo family are all extremely dedicated to the sport itself, as well as its development.”

Judo Canada COO Patrick Esparbès is continually impressed with the richness of judo stories from all across the country. “Eileen is a perfect example of the importance of making judo accessible to as many people as possible with new adapted programs. You have to be attentive to the needs and realities of the clubs. She discovered judo through self-defence classes, and since then, has become a great valuable volunteer, coach, administrator and advocate in her home province.”

“Whether competitive, recreational, coaching, or refereeing, each of the forms our sport takes is important and shouldn’t be forgotten, because ultimately judo’s development is linked to this well-roundedness.”