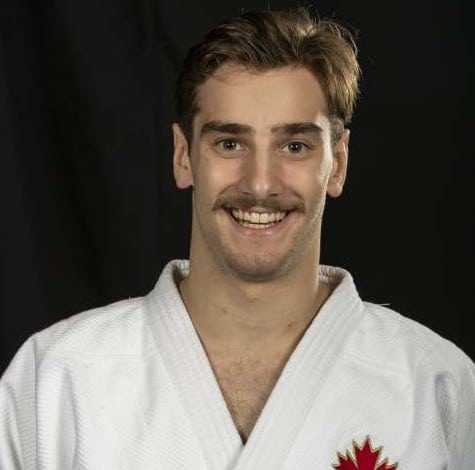 Julien Frascadore (under-66 kg) had a successful day on Saturday at the European Judo Open in Málaga, Spain. The Canadian ended with a record of two wins and two losses; both of the latter were to future medal winners.

After a first-round bye, the Québécois disposed of Yair Elkind of Israel in his first bout of the day. He then went on to defeat the very strong Vadym Chernov of Ukraine.

Patience was key for the Canadian judoka, who scored an ippon with only four seconds left in regulation time. “In my second fight, I had a very tough opponent. I stuck to my coach’s strategy throughout the bout and was able to capitalize on it at the very end,” explained Frascadore, following the tournament.

However, his quest for gold came to a halt in the next round, when he faced off against Amit Bobovich of Israel, who later snagged first-place honours in the weight class.

Following a short break, Frascadore returned to the tatami for the repechage. Despite a valiant effort on his part, the 21-year-old received several penalties and was defeated by Switzerland’s Freddy Waizenegger, who went on to win a bronze medal.

“My fight against Waizenegger wasn’t easy. He was very strategic and quickly got me to take penalties. With two penalties, I found myself in a tenuous situation, and I made an error that cost me the bout. It was a great experience, though, and I’m happy I got four fights in,” said Frascadore, who had lost his only bout of the day last week at the Grand Slam in Paris.

He pointed out that the experience he gained in France served him well in Málaga. “Over the past couple of years, there haven’t been many opportunities to compete. I got over my stress at the Grand Slam and was ready to fight here, in Spain.”

Fellow Canadian Hakim Chala also fought in the under-66 kg group today. His day came to an end in the second round, when he lost to Britain’s Gregg Varey. Earlier, Chala had soundly defeated Dominic Agudoo of Ghana.

Kelly Deguchi Steps Up Once Again

After putting on an impressive performance at her first career Grand Slam in Paris last weekend, Kelly Deguchi (under-52 kg) had another successful day today, reaching the bronze medal final in Málaga.

However, the Canadian fell short of the podium when she was defeated by Spain’s Izaskun Ballestreros Gonzalez.

The Albertan began her day with three decisive victories by ippon over Laura Bajo of Spain, Sian Bobrowska of Great Britain and Joana Diogo of Portugal.

Deguchi lost to Italy’s Martina Castagnola in the semi-final before heading to the bronze medal match. Castagnola was later crowned champion in the category.

The only other Canadian in action today was Gabriel Juteau, who lost his first and only bout to Tom Witzig of Switzerland.

The European Open will continue on Sunday in Málaga. Canadians Alicia Fiandor (under-70 kg), François Gauthier-Drapeau (under-81 kg), Alex Marineau (under-81 kg) and Louis Krieber-Gagnon (under-90 kg) will all be in action.