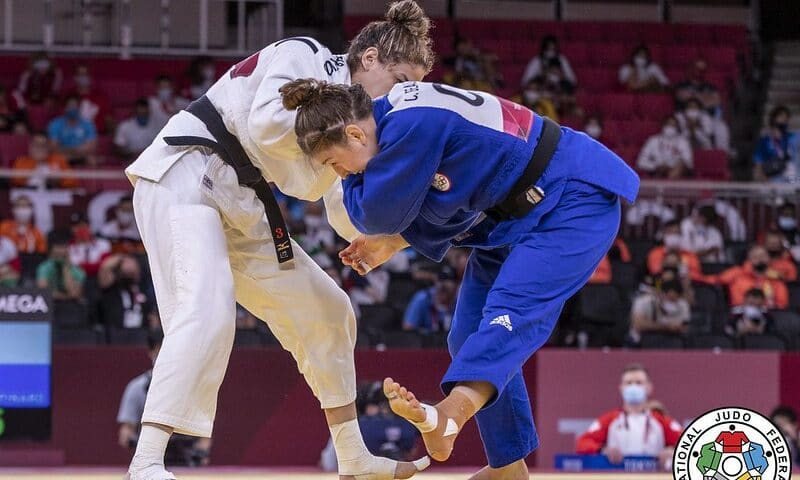 Montréal, February 5, 2022 – On Saturday, Catherine Beauchemin-Pinard returned to competition for the first time since her bronze medal performance at the Tokyo Olympic Games last summer. At the Paris Grand Slam today, the judoka from Saint-Hubert lost her first match of the day in the under-63 kg group to Juyeon Lee of South Korea.

“My expectations were not very high, but I wanted to get back into my routine and to know that I was up to the task after more than seven months (away from competition). Obviously, things didn’t go the way I wanted them to, but I felt the need to compete again. I had hoped for better,” admitted Beauchemin-Pinard, who, despite her loss, is not distressed by her result.

In the evenly matched bout, the two adversaries had received two penalties each when Lee tilted backward, causing the Canadian to fall onto her back with less than a minute to go. It was enough for an ippon.

“I was the one who attacked first, but she’s the one who ended it. The win was within my reach, and I think that under different circumstances, and with better preparation, I would have had it,” said Beauchemin-Pinard, referring to the closure of the National Training Centre since just after Christmas, due to the Omicron variant.

The Olympic bronze medallist added that her return home after her successful performance in Tokyo was not especially relaxing. “Those few months where I didn’t get a lot of rest have maybe left their mark […] Today (Saturday), I needed to break the ice again.”

François Gauthier-Drapeau will be the only Canadian in action on Sunday. He will compete in the under-81 kg category.