Lasha Tsatsalashvili One Win from Medal 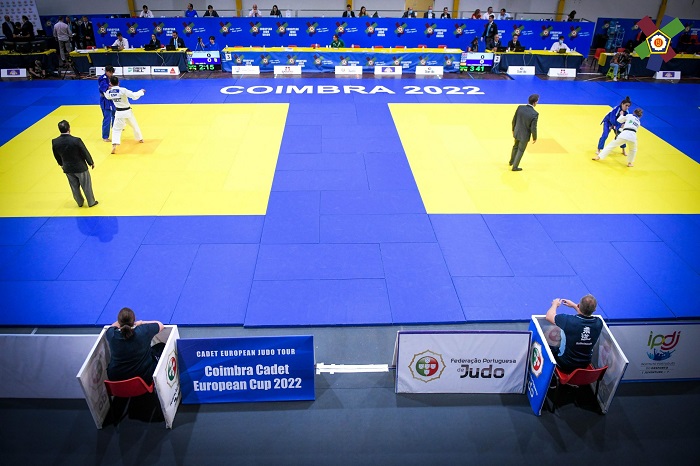 Montréal, May 29, 2022 – Lasha Tsatsalashvili of Ontario posted the best Canadian result of the weekend at the Cadet European Cup in Coimbra on Sunday. Tsatsalashvili, who won a gold medal at the PanAmerican-Oceania Cadets Championships this spring, finished fifth in the under-73 kg group today.

In his final fight of the day, he was denied a bronze medal by Luke Davies of Britain.

“Lasha was caught a bit off-guard by [Davies] in the first few seconds of the bout. Maybe he wasn’t focused enough, but other than that, he fought well overall. He has a lot of potential and I would have liked to see him finish the day with a medal,” explained team coach Daniela Krukower, adding that Davies’ victory over Tsatsalashvili was the upset of the day.

“[Lasha] was feeling confident because the British boy was not one of the strongest contenders, but Davies ended up with several surprise victories throughout the day. He even came close to beating the Dutch boy, who is much stronger.”

Earlier in the day, Tsatsalashvili had been given a bye in the first round before being defeated by Anatolii Tegipko of Ukraine in the next. The Ontarian made up for it in the repechage, with three consecutive wins over Joao Rosa of Portugal, Abdulmalik Maimani of Saudi Arabia and Inaki Baztan Merchan of Spain.

Among the Canadian girls, Brandi Lingley (+70 kg) of New Brunswick had the best result of the day, with a seventh-place finish. She bested Rosa Mane of Portugal before bowing out to Calypso Debuire of France.

In the repechage, she was unable to get past Giulia Telesca of Italy.

“It was great to see her win her first match by ippon. It boosted her confidence, but the next two rounds were more difficult. Nonetheless, it was a good experience for her,” noted Krukower.

Loane Gill of Quebec finished the day with a 0-2 record in the under-70 kg category. After being defeated by Italy’s Serena Ondei, who later won bronze, the Montréaler saw her day come to an end when she lost to Britain’s Julia Marczak in the repechage.

Mahée Savoie (-57 kg, New Brunswick) lost her only match of the day to Lena Bonnamy of France.

The Canadian judokas will remain in Portugal to attend a training camp.