Montreal, March 25, 2018 – Alex Marineau was the best athlete in the -81 kg category during the Panamerican Open that ended on Sunday in Buenos Aires. The athlete from Montreal concluded an excellent day with a victory by ippon against French Armann Khalatian.

The victory was made even sweeter for Marineau, considering that Khalatian had defeated him a week ago.

“I’m very happy to have had my revenge against him. I know him very well, because we often train together in Europe,” added the gold medallist. “I know that he’s very strong, and that he would try to take my back and crush me. I made sure to move a lot and to control his sleeve to bring him out of his comfort zone and to force him to make a mistake. I waited for an opportunity.”

Before that last bout, Marineau had defeated Mexican Samuel Ayala in the semi-final, as well as Santiago La Torre and Luis Vega, both from Argentina, in the first and second rounds. It’s worth noting that all these fights were won by ippon. Despite an injury to the hip that happened during his first fight of the day, the judoka didn’t slow down.

“I was confident from the start that I would get to the final. However, I knew that my last opponent would be a big challenge. I was going for gold, no matter how, but it’s always very satisfying have such a convincing victory!”

The medal haul was successful for Canadian judokas during the second day of competition at the Junior European Cup in Sarajevo, in Bosnia and Herzegovina. Hanako Kuno (-63 kg), Shianne Gronen (-70 kg), and Benjamin Kendrick (-90 kg) all won the gold medal in their respective categories. Allayah Copeland (-78 kg) and Joe Casey Andres (+100 kg) both won the bronze. 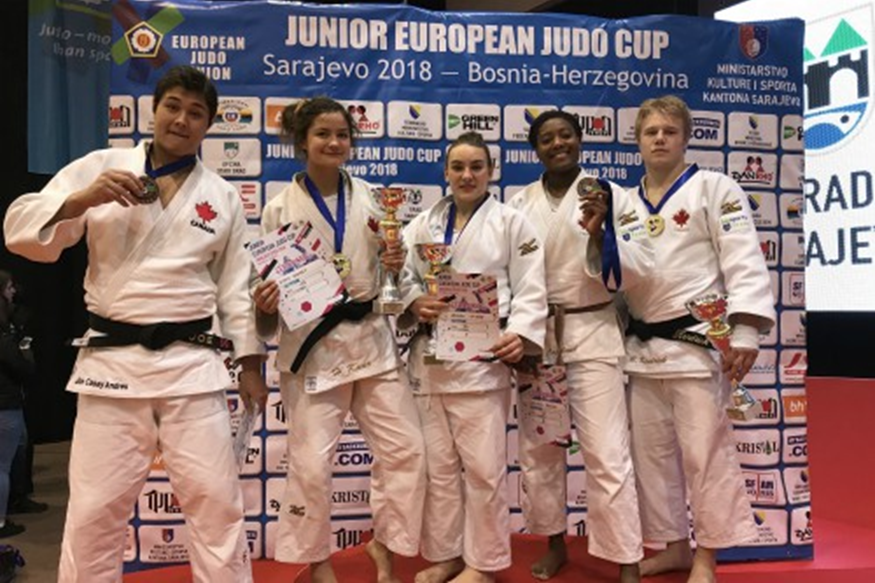 Kuno, from Lethbridge, won against Polish Agata Szafran and Montenegrin Mirjana Milic in the preliminary rounds. She then won the semi-final against Jovana Obradovic, from Serbia. The final bout was against Croatian Katarina Kristo, whom she defeated by scoring an ippon.

“I was kind of surprised with how good the final match went. I scored early in the fight, and I was able to finish with an ippon to win the match.”

Gronen also won all her fights of the day, defeating a local favourite, Bosnian Marija Zelenika, and Croatian Andela Violic. She kept her winning streak going into the semi-final and the final, first eliminating Montenegrin Jovana Pekovic by ippon in additional time, then Polish Eliza Wroblewska, to win the gold medal.

“There were a lot of new experiences for me today (Sunday). I was able to follow my game plan, and I had a good warm-up routine. I won my matches with a lot of what I’ve been drilling this week,” explained Gronen (Creston, British-Colombia).

“The third fight was the most difficult today, because it was challenging until the last second. I was losing, and I scored during the last 12 seconds, and then went into golden score. I scored, but it was taken off, so it was mentally challenging not to discourage myself, even when I thought I would lose.”

Kendrick also had a perfect day. He defeated Polish Lukasz Zajaczkowski, Bosnian Srdjan Spaic, and Montenegrin Lazar Cupic in the preliminary rounds, before also winning the semi-final against Moldovan Eugen Matveiciuc by ippon after 19 seconds, as well as the final against Serbian Darko Brasnjovic, where he scored an ippon and a waza-ari.

“I felt good! I had 5 fights, and won each of them by ippon. It was very hard to keep it together mentally and to manage the crowd and the distractions, but I think I fought pretty well all day, and that’s what I’m most satisfied about,” commented the Ontarian judoka.

“The guy I fought against in the semi-final is the Cadet World Champion, so entering the fight, I mostly thought about taking control right from the start. I grabbed him and scored an ippon during the first 20 seconds of the match.”

In the over 100 kg category, the bronze medal was won by Joe Casey Andres. He was defeated during golden score in the semi-final by Polish Krzysztof Zaleczny. The Albertan was victorious in the bronze medal bout, against Croatian Marcel Skalec.

Ontarian judoka Copeland lost in the first round, against Croatian Petrunjela Pavic, and had to fight two bouts in repechage, which she won, before going into the bronze medal fight against her teammate Annabelle Darlow. The fight ended with a waza-ari scored by Copeland, leaving Darlow in 5th place.

Canada is second in the medal ranking for the weekend, right behind Turkey, who won the same number of medals, but had more athletes in 5th place.

“With 5 medals today (Sunday) and 2 yesterday (Saturday), we’re even with our record of 7 medals in a weekend that set last year, but we have more gold medals this year,” noted national coach Jean-Pierre Cantin.

“I’m very proud of our athletes. Last week was a little more difficult, but with the training camp we had this week, we were able to work on a few things, and it paid off this week. It’s encouraging to see them improve and quickly put into action what we’re working on. ”