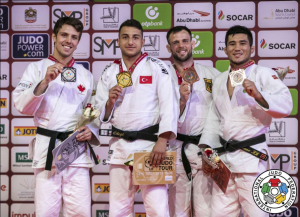 Montreal, October 25, 2019 – December 2, 2017, in Tokyo, in Japan, was the last time we had seen Arthur Margelidon on a Grand Slam podium. Almost two years later, the Quebecois put an end to the dry spell on Friday by winning the silver medal in Abu Dhabi.

As a two-time Grand Prix medallist this year, it was only a matter of time before the 26-year-old stood on a Grand Slam podium again. The United Arab Emirates stop was the right one, and Turk Bilal Ciloglu, 17th on the world ranking, was the only one to keep Margelidon, 8th in the world, from a perfect score in -73 kg.

“I’ve often been in the finals, but it’s good to win a medal today. Of course, when you’re so close to winning gold, it’s a little bitter, but it means there are still small things to fix and work to do,” said the Montrealer.

In the finale, the opponents fought until the end of regulation time, but Ciloglu, the 2018 junior world champion, was declared the winner because of a waza-ari he had scored with 20 seconds left on the clock.

“He has a very atypical style. He is very extreme. It didn’t bother me much, and I was dealing with it pretty well until I got a penalty,” explained Margelidon, who was penalized for non-combativity one minute before the end of the bout.

“After that, I stopped following my game plan to avoid being penalized again. I stayed closer to him, which was a mistake, because he was waiting for me to do it to try to throw me.”

In hindsight, the Canadian judoka knows he made a bad decision. “I was managing it well. I simply had to move a bit more and try a few attacks. It would have worked.”

Before facing the Turk, Margelidon had won his four previous bouts by ippon, notably the semifinal against Uzbek Khikmatillokh Turaev, ranked 14th in the world.

“It was a great day for ippons, but there were also a lot of mistakes. I have things to work on with my coaches to do better in future tournaments,” he added.

One thing is for sure, the Quebecois won valuable points for the Olympic selection. “I have won precious points, but I also lost some. The selection is going well, but I want to end this with as much confidence and as many points as possible. There’s still more work to do!”

Antoine Valois-Fortier Just Outside the Podium

In -81 kg, Antoine Valois-Fortier barely missed the podium, but had to settle for fifth place after being defeated by German Dominic Ressel, 6th in the world ranking, during the bronze-medal contest.

“I lost my focus for a moment, and it cost me the victory,” explained Valois-Fortier.

The Beauport-native hadn’t been defeated before the semifinal contest, in which he faced Georgian Luka Maisuradze, 17th.

“It started off well, I won my first three fights. Even though I didn’t feel at my best, I believed I had a chance to stand on the podium,” said the athlete, who couldn’t receive guidance from his coach Nicolas Gill during his fights because his judogi was deemed nonconforming.

Fighting in the same category, Étienne Briand was eliminated in the second round when Uzbek Kamoliddin Rasulov defeated him by ippon after only 23 seconds on the mat. The Sept-Îles native, ranked 19th in the world, had previously defeated Russian Stanislav Semenov.

“It’s a good day, with Arthur winning a medal and Antoine fighting for one. The level of the tournament was very high, and it augurs well for the future,” commented coach Nicolas Gill.

On the women’s side, after getting a bye through the first round, Canadians Catherine Beauchemin-Pinard (Longueuil) and Kelita Zupancic (Whitby, Ontario) were both eliminated in the second round in their respective categories.

Fighting in -63 kg, Beauchemin-Pinard, 10th in the world, was defeated by Venezuelan Anriquelis Barrios, 32nd, who went on to rank in fifth place.

“Catherine has defeated her in the past. The fight was going well, but she made a mistake, and the Venezuelan took advantage of it,” said Gill.

In -70 kg, Austrian Michaela Polleres, 6th in the world, eliminated Zupancic, 14th. “She ranked in fifth place at the World championships. We knew it would be a difficult fight,” commented the coach.

Shady El Nahas will be in action in Abu Dhabi on Saturday. After a bye through the first round in -100 kg, the Canadian, ranked 11th in the world, will be up against the winner of the bout between Polish Oleksii Lysenko and Hungarian Zalan Ohat.