Shady El Nahas Third Thanks to a Secret Technique 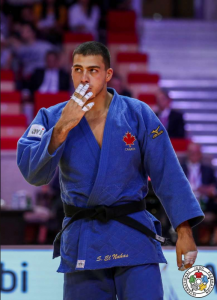 Montreal, October 26, 2019 – Shady El Nahas was the only Canadian in action on the last day of the Abu Dhabi Grand Slam, and he made sure not to go unnoticed. On Saturday, the Ontarian won a bronze medal in -100 kg after he surprised Pakistani Hussain Shah Shah only 30 seconds after the start of the bout.

Inspired by his teammate Arthur Margelidon, who won a silver medal on the previous day in -73 kg, the Canadian lied on the mat and rolled on his opponent who lost control, and El Nahas was able to score an ippon.

“I’ve been training this secret technique for a few months. I’m tall, so nobody sees it when I start it. It works very well and I won two fights that way. It went well! Nicolas (Gill, the coach) told me to be patient, I waited for an opening and it worked!”

In the previous fight, in the semifinal, El Nahas was defeated by South Korean and future gold medallist, Cho Guham, 2018 world champion.

“It was my third time against him, and it’s closer each time. We went into overtime for 3 minutes and I lost because of my penalties. I get better against him, and next time will be my chance to defeat him. Each medal and each point are important to qualify for the Olympic Games, so I stayed motivated for my last fight,” added the athlete who thinks his Olympic qualification ranking will climb up to third place in his category.

“These results are the result of his hard work,” said coach Nicolas Gill. “The Pakistani was a bit of a surprise today; we weren’t expecting him. I knew him pretty well, and the strategy was simple on our side. Shady’s style worked great to find ways against him and that’s what happened. He deserves all the credit.”

Gill made positive comments about the Canadian team members, who will be coming back from the United Arab Emirates with a silver medal, a bronze medal, and a fifth place.

“The groups of athletes who came here needed more points to get into the top 8 (in the world) rather than solidify their Olympic qualification. Being seeded at the Olympic Games is an advantage to avoid facing the favourites before the quarterfinals. It’s essential!”