London (August 27, 2012) – Three days before the beginning of competition in London, the three judokas representing Canada have arrived in the Paralympic Village and started their training sessions. Justin Karn (Kitchener, ON), Tim Rees (Victoria, BC) and Tony Walby (Ottawa, ON) will be competing respectively in the -60Kg, -100Kg and +100Kg categories under the coaching advice of Tom Thomson (Brantford, ON).

“I was on the National team for 20 years before I discovered Judo was accessible to athletes with a visual impairment.” said Walby. “I have earned 12 national medals, and these are my first Paralympic Games. My wife and 16-month-old daughter Eva came to watch me this year, and this is huge for me. Winning a medal in front of them would mean the world to me.”

Coach Thomson feels confident his athletes are well prepared for the Games. “We fear no one,” he says. “Justin, Tim and Tony have been resilient and their technical skills are better than most. They have been mentally preparing for months, and this is the hardest part of the game – controlling your mind.”

Paralympic judo is practiced by athletes with a visual impairment. There is very little difference between Olympic and Paralympic judo. The main difference is that athletes need to have physical contact with their opponent before each match begins. 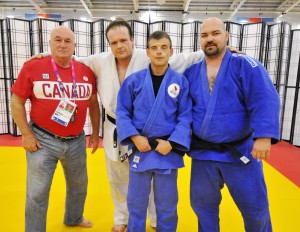 About the Canadian Paralympic Committee