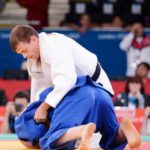 “I was very disappointed with my first match,” said Karn. “My opponent was very strong technically. I lost and really wanted some payback, some revenge. I went out there with a game plan for my second match and it worked out!”

Karn won his second match against Columbian Juan Castellanos by ippon in 4:21 minutes.

Karn then faced Korean Lee Min-Jae and lost by ippon in 3:03 in repêchage, ending his participation in the Games with a seventh place finish in his category.

“I’m hoping for the best for the future,” Karn said. “I’m definitely not done yet. I’m looking forward to competing again in 2015 and Rio. I will definitely be cheering on my teammates on Saturday.”

Canadians Tony Walby (Ottawa, ON) and Tim Rees (Victoria, BC) will both be competing on September 1 in the +100Kg and -100Kg respectively.

About the Canadian Paralympic Committee