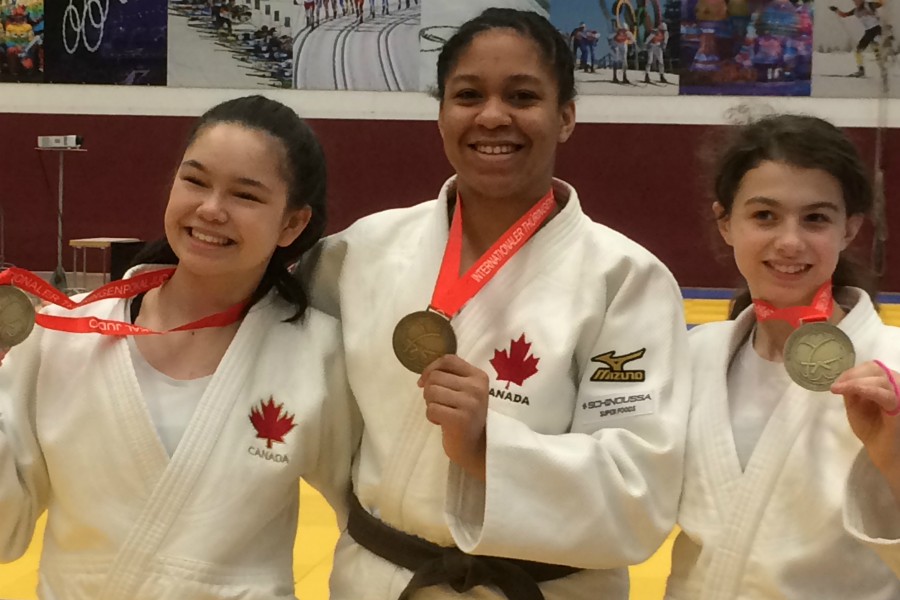 Montreal, March 23, 2019 – Three Canadians deserved a spot on the podium at the International Thuringia Cup, in Germany, on Saturday. Éibhleann Alexander, Evelyn Beaton and Asia Douglas all won a bronze medal.

Asia Douglas won her medal in the +70 kg category. The day didn’t start as well as the judoka hoped after she was defeated by Netherlander Demi Adely, who won the silver medal.

“I’m happy with the bronze medal. I would like to have the match back against my first opponent, because I beat her earlier in the season, and I feel I had an opportunity to be higher on the podium,” said Douglas.

She came back strong in repechage, winning her three bouts. She defeated Lucia Erdorf, Lea Fischer, and Moniek Reinicke, all from Germany.

Evelyn Beaton was the only Canadian fighting in -44 kg. She won against Brazilian Laura Soken and German Leticia Jung.

“I wish I could have my quarterfinal back. The bronze medal is nice, but I would have liked to have challenged for the gold,” said Beaton.

In -57 kg, Éibhleann Alexander started off with four consecutive wins.

Her only loss of the day was against German Samira Bock, the silver medallist. She was able to come back by eliminating Sarah Orth, another German athlete, to win the bronze.

“I’m very happy with my performance. I have been a member of several provincial teams in the past four years, and I think that learning from all the different coaches has helped me improve. It is a very satisfying medal,” she said. The judoka added that her father’s joy was contagious after the tournament.

“There are a lot of people who have put time into my judo, but my father is one that has always been behind me and supporting me. He is really pleased that I won a medal today, and that makes me really happy,” she added.

Coach Ewan Beaton had nothing but praises for the athletes after the competition. “It was a very good day for the U18 Team at the Thuringia Cup,” adding that he was impressed by the technique of today’s medallists. “The Thuringia Cup is always a difficult competition with players who are regular medallists at the IJF Cadet and Junior tour.”

See the table below for the complete list of athletes in action today at the International Thuringia Cup, in Germany.

Bradley Langlois was the only athlete representing Canada at the Santiago Pan American Open, in Chile, but he made sure he wouldn’t go unnoticed by winning a bronze medal. The Ontarian defeated Humberto Tobar and Jesus Gavidia Mendoza to finish on top of his pool.

He was then defeated by Lincoln Neves, but came back in repechage and won against Gilberto Cardoso to win the bronze medal.

It was the second time in a row the Canadian defeated Cardoso to determine who would stand on the podium. Langlois had also defeated the Mexican athlete to win a bronze medal last week, at the Cordoba Panamerican Open, in Argentina.

Things didn’t go as well for the judokas at the Bremen International Masters, in Germany, with the U18 team. Ontarians Amr Abd Elrehim and Simon Popov had the best ranking in the Canadian team, being seventh in -90 kg and +90 kg.

“Our team is young and unexperienced, so I’m not surprised with the results,” said national coach Jean-Pierre Cantin. “There are still some good points: the athletes worked hard and never gave up.”

See the table below for all the Canadian athletes who competed at the event. The tournament will continue on Sunday with the Junior/U21 events.