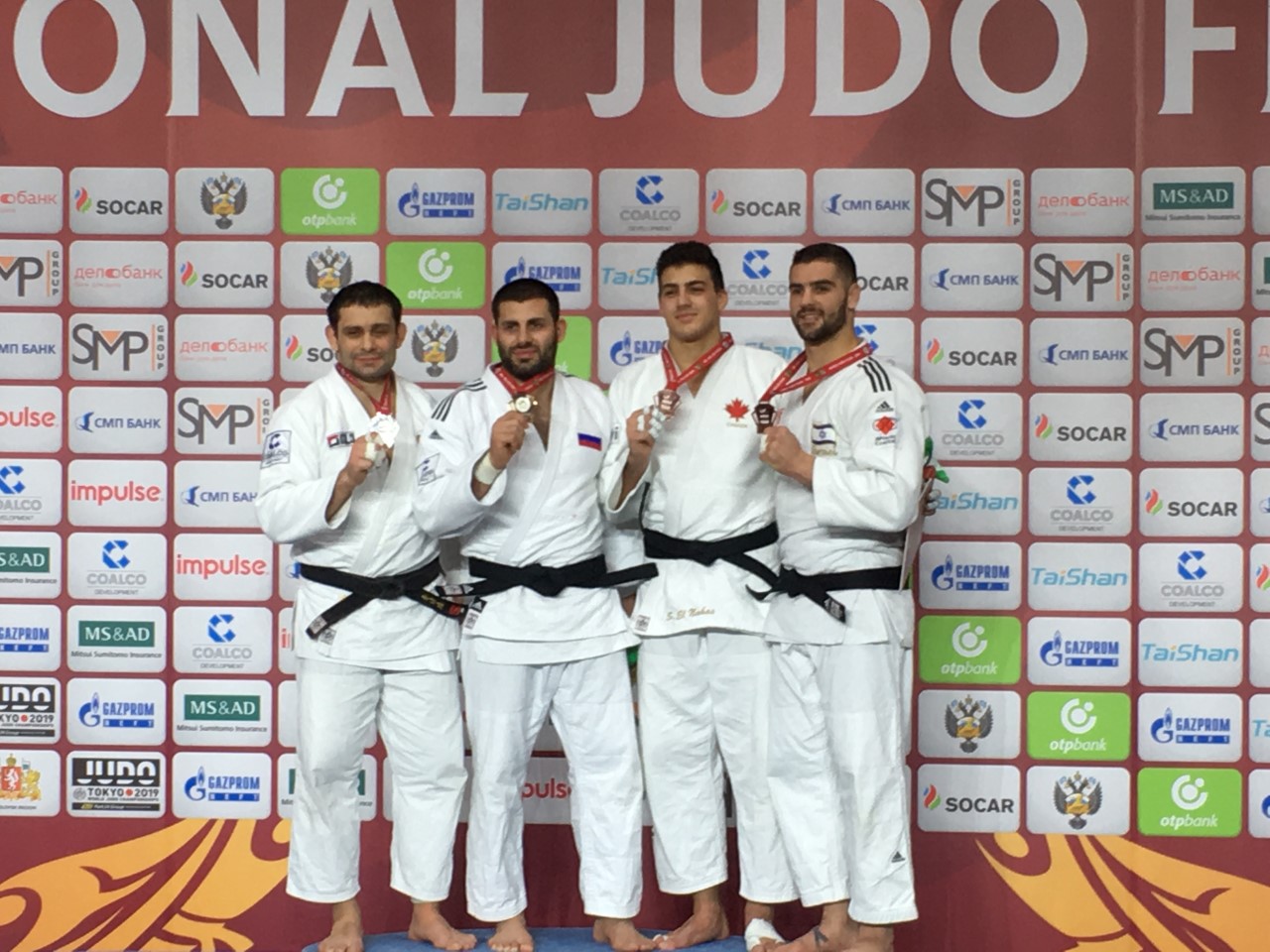 Montreal, March 17, 2019 – Like his teammates Christa Deguchi, Jessica Klimkait, Catherine Beauchemin-Pinard and Étienne Briand in the last two days, Canadian judoka Shady El Nahas stood on the podium at the Ekaterinburg Grand Slam. On Sunday, the Ontarian won a bronze medal in the -100 kg category.

Being the only Canadian in action for the last day of the tournament in Russia, El Nahas, ranked 33rd in the world, didn’t disappoint. Facing Russian Niiaz Bilalov, ranked 17th in the world, during the bronze-medal bout, the Torontonian held on until the golden score, during which he scored a waza-ari to earn his spot on the podium.

“Shady did very well today. He followed the plan and gave everything he had during each fight. He deserves to be on the podium,” commented national coach Sasha Mehmedovic after the Canadian judoka won his medal.

Earlier in the day, El Nahas defeated French Cyrille Maret and Brazilian Leonardo Goncalves. However, in the quarterfinal against Russian Arman Adamian, El Nahas lost quickly. Adamian, ranked 54th in the world, threw him for ippon after a short 6 seconds on the clock.

The Osaka Grand Slam silver medallist bounced back in repechage by eliminating Latvian Jevgenijs Borodavko and earning his spot in the bronze-medal fight.

El Nahas wrapped up a successful weekend for Canadian judokas, who won a total of 5 medals.

“I’m proud of how our athletes performed this weekend. They came here to earn valuable points for their Olympic qualification, and that’s exactly what they did. I think it’s our best performance in a Grand Slam during the Olympic qualification period,” said Mehmedovic.

Mohab El Nahas on the Podium at the Pan American Open

Mohab El Nahas was in action at the Cordoba Pan American Open, in Argentina, where he reached the -90 kg finale.

He then met with a stronger opponent in the finale, facing Peruvian Yuta Galarreta Vilar, to leave the tournament with a silver medal.

Michel Guerault was eliminated after the first round in -100 kg. He lost against French Cédric Olivar, won went on to win the silver medal.

At the Coimbre Junior European Cup, in Portugal, Alexandre Arencibia won a bronze medal in -81 kg.

After losing his first fight by ippon against British Lachlan Moorhead, the Canadian judoka came back strong and won 3 bouts in repechage to earn his spot in the bronze-medal fight.

“I lost my first fight, but I had the chance to come back. The more the day went by, the better I felt. I was patient and I scored at the right time,” explained Arencibia after defeating Netherlander Joris Hoedeman to earn his medal.

“Alexandre had a rough start, but he got back up. It’s a very good result for him, and it’s the kind of day during which he can gain experience,” added national coach Jean-Pierre Cantin.

Also fighting in -81 kg, Solomon Choran won his first fight against Portuguese Pedro Lima before being defeated by Czech Mikulas Mesko. He was then eliminated by British Aaron Miller in the first round of repechage and ended in 9th place.

Morgan McKenzie and Payton Harris were both eliminated after their first fight.

In -100 kg, Yohan Chouinard had a score of two losses, in the first round and in repechage.

Godbout Defeated in the Bronze-Medal Fight

On the women’s team, Coralie Godbout was in the final for a bronze medal in +78 kg.

After winning her first fight, she was defeated by the winner of the tournament, Polish Julia Swiatkiewicz.

She then won a bout in repechage, against Portuguese Catia Rosa, to earn her place in the bronze-medal bout. However, the Canadian was defeated by waza-ari by Russian Albina Cholombitko.

“I was a little nervous today, but I’m proud of the way I fought. I wish I had done better, but I’m still happy with the result,” said Godbout, who took the 5th place.

Last but not least, in -78 kg, Anabelle Darlow lost her two bouts.

“We have a young team and we came here to gain experience,” said Jean-Pierre Cantin of Judo Canada’s protégés. “I was expecting a little more from certain athletes, but in general, I’m very happy with their performance.”