A Last Round of Applause for Calgary’s LOC

Montreal, May 25, 2018 – During the Hohhot Grand Prix, in China, Christa Deguchi won the gold medal in the finale against her teammate Jessica Klimkait in the -57 kg category.

“Today was a good start to the three-day event here in China. Christa and Jessica both absolutely dominated the under 57 kg division at the Hohhot Grand Prix,” said their coach, Sasha Mehmedovic.

The all-Canadian finale was won by ippon by Deguchi after 2 minutes and a half.

Deguchi won the gold medal and Klimkait brings back silver after the first day of competition at the Hohhot Grand Prix.

Both Canadians had a perfect score before the finale.

Deguchi defeated American Leilani Akiyama, Brazilian Rafaela Silva and Chinese Wen Zhang in the first rounds. In the semi-final, she won again, this time against Japanese Momo Tamaoki. All her fights of the day were won by ippon.

For her part, Klimkait eliminated Mongolian Enkhriilen Lkhagvatogoo, Chinese Xuemei Feng and Panamanian Miryam Roper in the preliminary rounds. She won the semi-final against South Korean Youjeong Kwon before going into the gold medal bout against Deguchi.

“Both girls were unstoppable on their way to the final. It was great to see two Canadian flags being raised in the same category during the medal ceremony. This result demonstrates how strong Canada is in this division on the world circuit,” said Mehmedovic.

In the -52 kg category, Ecaterina Guica won her first bout of the day, against Moroccan Fatima Zahra El Qorachi, before being eliminated in the second one by South Korean Yejin Jang.

Jacob Valois (-66 kg) was eliminated by waza-ari after his first fight, against Iranian Alireza Khojasteh.

The tournament will continue on Saturday in China. 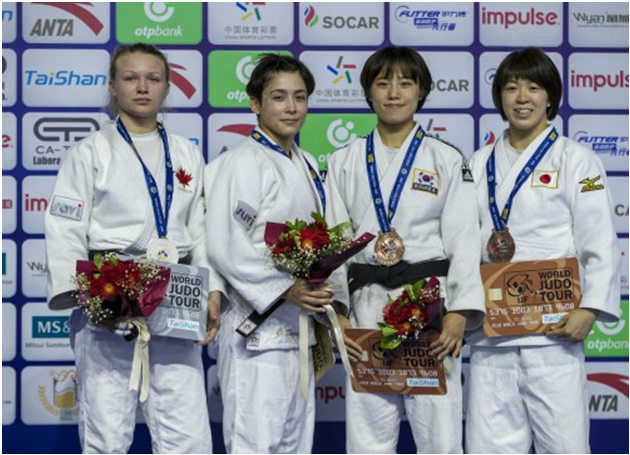