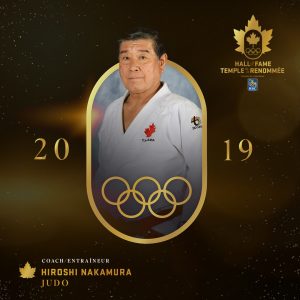 Montreal, September 23, 2019 – It is with great pride that Judo Canada will see the name Hiroshi Nakamura added to the Canadian Olympic Hall of Fame on October 23 in Toronto. With the news being confirmed today by a press release from the Canadian Olympic Committee, Judo Canada considers the honour was truly deserved for “Sensei” Nakamura, an icon of Canadian judo.

The prestigious tribute to Mr. Nakamura’s career highlights his role as a leader of Canadian judo. At a time when judo was still new on Canadian soil, he stood out by his dedication and perseverance to allow athletes representing Canada to reach the pinnacle of success on the international stage.

Despite the extent of his achievements, “Sensei” talked about his induction with humility and wisdom. “It’s an honour! I love judo, and I don’t think there’s a magic recipe. Success comes with relentless work, and that’s what I’ve always done with my athletes,” says the man who was widely involved in the spreading of the sport when he came to Canada in 1968.

After opening his own dojo, the Shidokan, Nakamura rose through the ranks until he became the national team coach, a position he filled for 15 years. During his time at the head of Canadian judo, his leadership contributed to Canada’s international recognition in high-performance tournaments, notably in 5 Olympic Games.

Indeed, for Mr. Jani, still involved with Judo Canada as the president of the High Performance Committee, Hiroshi Nakamura’s dedication has always been a motivating factor for his athletes.

“I think Mr. Nakamura has always been 100% committed to his role as a coach, and that motivated the athletes. He put every ounce and fibre of his being into it for days, and we could see in him the same rigour and desire we had,” he said about his former coach, who never faltered to pursue his mission, even away from the Shidokan mats.

“Whenever we had a problem, he would always try to come up with a solution to help us in all aspects of life. He is well-known in the world of judo, and he allowed us to improve even more by opening the doors of Japan, where we trained several times.”

Some of his proteges also dedicated their post-Olympic career to become leaders of the sport and community. Among those is Nicolas Gill, CEO and High Performance Director of Judo Canada.

With Nakamura, Gill had a prestigious career that reached its peak with two Olympic medals, a bronze in Barcelona in 1992, and a silver in Sydney in 2000.

“Mr. Nakamura and I started working together in 1985, when I joined the Shidokan. He had a huge impact on me, and he was a core element in my development. We’ve always stayed close, and I know that if I need him, he’ll be the best person to help me,” said Gill, who then followed his sensei’s footstep and became a high performance coach. He was able to enjoy his first Olympic medal as a coach with Antoine Valois-Fortier, in 2012, in London, where he won a bronze medal.

Now at the head of Canadian judo, Nicolas Gill tries to inculcate the values promoted by Mr. Nakamura to the judokas training at the national training centre to perfect their technique and further their development.

“Mr. Nakamura and I have a lot in common, and I think it’s one of the reasons why we’ve always worked well together. He was very ambitious and always wanted more! It was innate in him. Now, it’s my time to share these values with the athletes at the national training centre. Hard work, relentlessness and passion are the foundation of success and that’s how we want to build our culture.”

“Sensei” Nakamura (9th dan) left an indelible mark on several generations of athletes, and according to the 77-year-old, his work isn’t over.

“I don’t think about retirement. I enjoy what I’m doing, and now, I’m training 6 to 17-year-olds at Shidokan to prepare them for the national training centre. As I said earlier, I love judo, it’s part of who I am. My duties are not what they used to be, but I’m still getting future Olympians ready!” commented Nakamura, whose passion has allowed the evolution of an ecosystem promoting and developing the best possible results for each judoka.