Rooney and Hu Barely Miss the Podium in Chungju 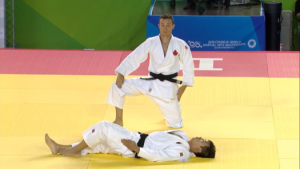 Montreal, September 9, 2019 – The Judo Kata World Championships were held in Chungju, in South Korea, on September 4-5. 4 teams were representing Canada.

Shane Rooney and Bailey Hu were the Canadians with the best result, having placed 4th in Katame No Kata with a total score of 392 in the final. Teams from Japan, France and Italy were on the podium, with respective scores of 431, 409.5 and 403.5.

Rooney and Hu have been competing together for two years, and their performance at Worlds was their best performance ever. “We had a good result, given that we only trained this form of kata (Katame No Kata) for one year,” said Rooney. “We were hoping to get on the podium, and going on, it will continue to be our goal.”

The pair will keep on working with their coaches to win medals in their next tournaments. In addition to several meets in Canada, they are planning to compete at the Marcel Clause, in Belgium, in March 2020, as well at the Pan American Championships, and the next World Championships, held in Poland.

Also competing on day 1 in Chungju were Aiko Lachaine and Danielle Ferland, who were in 9th place of their group with a score of 361.5 in Ju No Kata. On day 2, Gord Okamura and Kelly Palmer, long-time partners who announced earlier this year that this would be their last year competing together, barely missed the final, placing 4th in their group with a score of 501 in Kime No Kata. Allyn Takahashi and Rajeev Venugopal, competing in Goshin Jutsu, scored 494.5 points and were in 6th place in their group.

Visit www.ijf.org for full results of the competition.