Montreal, December 3, 2017 – Two of Canada’s judokas shared a seventh-place finish in the -90 kg category on Sunday at the Tokyo Grand Slam. Zachary Burt and Louis Krieber-Gagnon received the same ranking on the final day of the tournament. 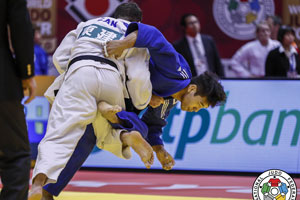 Burt’s day came to a close in the repechage when Japan’s Shoichiro Mukai ousted him by waza-ari. The Canadian had earlier bowed out to a local favourite, Kenta Nagasawa, who won the match by waza-ari and moved on to the semi-finals.

“Both were very strong. I felt good against Nagasawa, but Mukai surprised me a few times so I fell behind in the score andwasn’t able to come back. They had the crowd behind them, which probably helped them a little, even though I didn’t really notice,” stated Burt.

The Oshawa resident was admittedly disappointed in his results, given that he had been aiming for the podium. “Both my losses were really close. It’s one of the biggest and most prestigious events in the world so I knew it would be really hard to reach the podium, but I still thought I could do it. It was definitely a good experience for me.”

In the preliminary rounds, Burt beat South Korea’s Lee Jae-yong by waza-ari and Peru’s José Luis Arroyo Osorno by ippon. “I had fought Lee once before, back in March, and it was a very long and close fight, so I was a bit nervous today, but it went much better than last time.”

Krieber-Gagnon Blocked in the Repechage

Louis Krieber-Gagnon also saw his day come to an end during the repechage, when Georgia’s Ushangi Margiani shut him down by ippon.

In the preliminaries, the Montrealer recorded two victories and one defeat, all by ippon. His two wins were against Finland’s Jaako Alli and Switzerland’s Ciril Grossklaus. In his third match, however, his short winning streak came to an end when Japan’s Yusuke Kobayashi gained the upper hand.

Étienne Briand (-81 kg) of Sept-Îles and Kyle Reyes (-100 kg) of Brampton did not rank in their respective categories. They had both received a bye at the beginning of the day and lost their first matches.