Montreal, July 27, 2019 – Canadian judokas Antoine Valois-Fortier and Arthur Margelidon each won a silver medal in their respective categories after a near-perfect day on Saturday at the Zagreb Grand Prix, in Croatia. 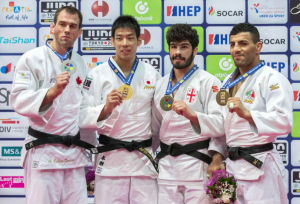 Antoine Valois-Fortier didn’t have it easy in -81 kg. After three victories to reach the semifinal, the Quebecois was up against the number one on the world ranking, Iranian Saeid Mollaei.

“Mollaei is one of the bests in the world and Antoine had an excellent fight. He was patient and scored at the end of the match to reach the semifinal,” explained coach Michel Almeida after the bout, won by waza-ari.

For the last bout of the day, Valois-Fortier was facing Japanese Takanori Nagase, a rematch of the finale at the Montreal Grand Prix on July 6. Once again, the Japanese had the upper hand after a fierce match.

Despite the result, Almeida was very proud of his athlete, whom he now considers as one of the best strategists in the world. “He had a great day, even better than in Montreal. He proves his competition level keeps getting better. He was very offensive in the final contest, but he couldn’t score. Those are details, I’m very happy for him,” he said.

“I’m very happy with how today went, especially my win in the semifinal! I met my nemesis again in the finale and I’m a little disappointed with the result, but I think I’m on the right path for Worlds in Japan next month,” commented Valois-Fortier.

Also fighting in -81 kg, Étienne Briand won his first bout, but was eliminated after being defeated by South Korean Seungsu Lee, who ranked in fifth place. 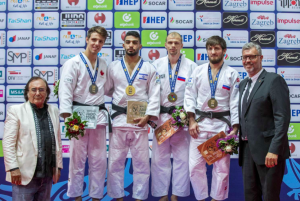 The Canadian then defeated Russian Musa Mogushkov by waza-ari, earning him a spot in the final against Israeli Tohar Butbul. Like his teammate Valois-Fortier, Margelidon couldn’t finish with a perfect score and lost by waza-ari.

However, according to Almeida, this is far from a bad result for Margelidon, who showed a lot of discipline during his fights.

“He had quite a day! He was less offensive than usual, because we had laid out a strategy, and he followed it perfectly. He was very good at positioning himself and this was a great tournament for him, even though he’s not leaving with the gold medal.”

Kelita Zupancic (-70 kg) was the only other Canadian to get a ranking; she was in fifth place in her category. She won her first two bouts, but a loss against Netherlander Sanne Van Dijke sent her in repechage, where she defeated Polish Daria Pogorzelec by ippon.

Her win sent her through the bronze-medal final against Austrian Michaela Polleres, who defeated the Canadian.

“I’m happy with Kelita’s performance. She didn’t win a medal, but she showed a nice progression. It’s another step toward her goal of being a world champion,” said Almeida.

The only other Canadian in action, Catherine Beauchemin-Pinard (-63 kg), wasn’t able to score and was eliminated in the preliminary round.

The tournament will continue on Sunday in Zagreb with Canadians Zachary Burt (-90 kg), Shady El Nahas (-100 kg), and Kyle Reyes (-100 kg), who will try to win the honours in their respective categories.

Julien Frascadore (-66 kg) was the only Canadian to get into repechage on Saturday at the Junior European Cup in Berlin, in Germany. After losing his first bout against Georgian Luka Kapanadze, the eventual silver medallist, Frascadore won against German Lukas Romahn and reached the second round of repechage.

He was then defeated by Spanish Rosendo Laine Ramirez in a fight he could have won.

“He was able to score a waza-ari, but his opponent came back to score an ippon and won. It was very hot and Julien felt a lack of energy,” explained coach Jean-Pierre Cantin who, despite two losses, was satisfied with his protégé.

“He was up against very strong opponents today (Saturday), and he didn’t do anything bad. In his first bout, he lost against someone who made the final, and he held his own. It’s good for him, and he’s gaining experience.”

The other athletes to score a victory for Canada were Isabelle Harris (-63 kg) and Coralie Godbout (-78 kg), two athletes in their first junior year who will grow after today.

“Isabelle and Coralie just started as juniors, and small technical mistakes got them eliminated. We see this often with judokas who go from cadet to junior, and now, they know what it takes to get to the next level. They were eliminated, but they learned a lot today.”

Also in action on the first day of the tournament in Berlin, Camelia Pitsilis (-63 kg), Hakim Chala (-60 kg), and Mitchell Markwat (-66 kg) were eliminated in the first round.

After their elimination, Canadian judokas went into the stands, where they could observe the best athletes of the day, a crucial step of their development according to the Canadian coach.

“We would have liked to end with more victories, but it didn’t happen. Fighting is one thing, but the day doesn’t end when they’re eliminated. After the elimination, that’s where the real thinking starts! They have to watch other fights to see what the winners are doing. That’s another way to gain experience.”